In South Korea students go to school in morning and came back home for sleep and next day this story repeats. 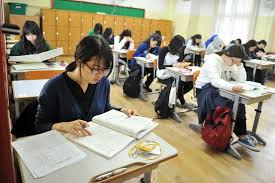 Now a question arises that what kind of school it was? How they studied? What they studied? What about tuition? Etc.
So, now we explore it.
When a student enters in the school their school starts. The duration of this is 7 hours
If a student is sleeping in the class then teacher don’t punish him or even let him sleep. After the first half is school is done, they sent to canteen for their meal. When the lunch is over, they sent back to their classes. When 7 hours completed then they’ll get meal again and sent to other branch of school and leave them for 4 hours to do extra studies. When the four hours are completed, they’ll get to one another branch of their school where specialized teachers teach them. The class is running for 3 hours and after they go to their buses from which they come and sent to their homes.

How to Apply for Court Marriage in Delhi

Real Blogger
Hi Guys, I am Hanit Vashisht founder of Legal Gyan and Real Blogger Web. Advocate in Delhi Saket Court. You may join me on Instagram